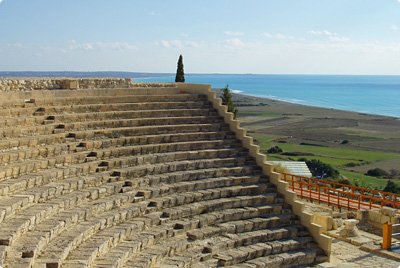 If you want to learn more about the cultural aspects of Limassol then a visit to Kourion Theatre is highly recommended, The Kourion Theatre was probably constructed around the early 2nd century A.D., this ancient monument is considered to be a major section of the Kourion, the theatre's architectural style has an influence of Hellenistic Architecture.
The Kourion Theatre was originally built by the Greeks, the Theatre experienced a few changes over the following years, in the Roman era the rows of seats had to be moved to a safe distance to protect spectators from wild animals during gladiatorial contests, the current structure of the theatre took shape in the late 2nd century A.D.

Finally after being ruined in the 4th century A.D. the Theatre has now been restored to a great extent, the Kourion theatre is set on a hilltop and has stunning coastal views, even today the Theatre has retained most of it's original spledour and even stages numerous music concerts and theatrical performances throughout the year.