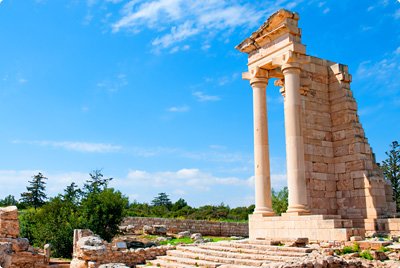 One of the most fascinating archeological sites in Cyprus is Kourion, this spectacular ancient city dates back to the 12th century B.C. and once was one of the most marvelous cities throughout the Mediterranean, the grand Greco Roman Amphitheatre has now been completely restored, being in the audience in a theatrical and musical performance in this primeval arena can be a hard to beat experience.

The Kourion is characterized by numerous ruined houses from the late Roman period, the House of Gladiators, the House of Achilles and the House of Eustolios are some of the remnants from early centuries, the floors in the houses are paved with mosaics, the early Christian Basilica dates back to the 5th century A.D.

One of the famous structures here is the Nymphaeum was built in the 2nd century A.D. and is a sacred place devoted to water nymphs, the salient features of the stadium stand for its magnificence.